Goats are among the most common farm animals in developing countries. Africa is home to about 35% of the world’s goat population (FAO 2016). They play an important socio-economic, nutritional and cultural role in rural households. An important indicator of goats’ adaptation to environmental conditions is their reproductive efficiency.

In the Democratic Republic of Congo, goats are the second most domesticated species after chicken. Goats make up between 30% and 60% of the country’s total livestock numbers. The country hosts three major breeds: the small goat, dwarf goat and Kasai goat. Congolese goat farmers raise and breed goats for meat production and commercial transactions, contributing up to 72% of households’ income in rural areas in the country. The productivity of African’s indigenous goats is low, and little is documented on the genetic diversity, production system and distribution of goats in DR Congo.

Patrick Baenyi, an Africa Biosciences Challenge Fund (ABCF) fellow from the Evangelical University in Africa, DR Congo, undertook a survey on 202 goat farmers in the country to identify typology, production management and critical traits considered in goat selection by farmers in three agro-ecological zones — South Kivu, Tshopo and Kinshasa. In his pioneering research, he collected phenotypic data and used phenotypic and molecular markers, that are the basis for animal genetic diversity studies, to characterize goat genetic resources.

The survey revealed that goats in the three zones were clustered into breed clusters, grouped into small goat and dwarf goat, mostly characterized by a black coat colour and curved horn. The clusters were further distinguished by their reproductive traits (i.e. the number of kids per gestation period, such as twins or triplets) and the total number of kids per goat’s lifespan. 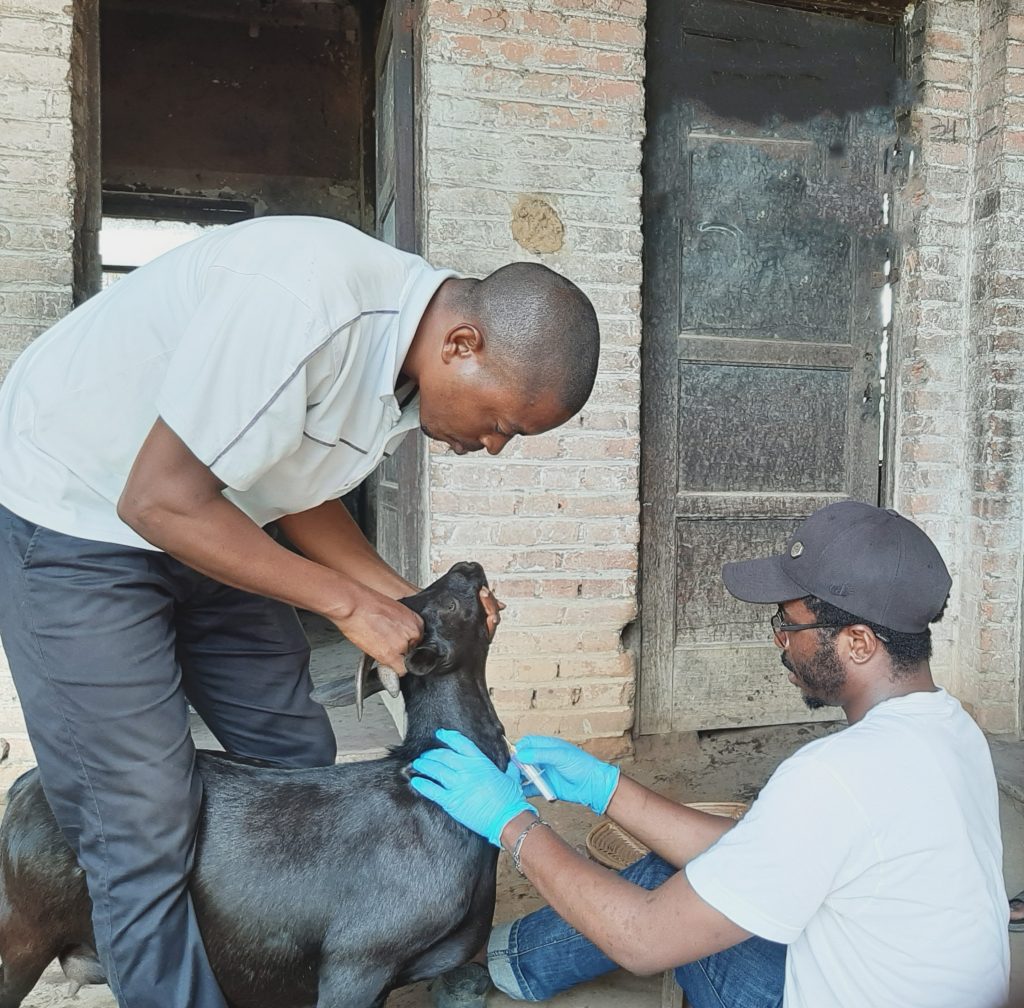 Baenyi and a member of his team collect a blood sample from a goat in Tshopo, DR Congo

Baenyi’s study was an important first step towards goat breeding in the country and aids decision-making on goat genetics improvement in the country. Its findings suggest that molecular characterization by sequencing and genotyping should be considered by animal breeders to clarify the physical differences in goat breeds that were observed and to identify whether these differences are genetic or adapted from environmental influence. A good understanding of this genetic characterization is useful in designing effective strategies for managing, improving and conserving domesticated animal resources.

‘Working with the Biosciences eastern and central Africa-International Livestock Research Institute (BecA-ILRI) Hub reinforced my skills in conducting genetics research and showed me the value of collaborating with other researchers and sharing my findings with the public. I was also trained in bioinformatics and proposal writing and I have continued with the invaluable mentorship relationships that started during my time at the hub,’

He is currently working under the supervision of ILRI’s Roger Pelle and his and is studying for his PhD in animal genetics and breeding at the University of Nairobi.