Science experts, policy makers and other pig industry stakeholders gathered in Uganda’s capital city, Kampala, in December last year to discuss important findings and insights on the impact of heat stress on the pig sector in the country, as a result of climate change.

Pig farming is a profitable enterprise in Uganda. However, the pig sector could face substantial disruption as a result of rising global temperatures and humidity. Pigs are particularly vulnerable to these effects due to their smaller lungs and inability to sweat.

A strong focus of the policy briefing event was to discuss heat stress challenges as well as explore opportunities for partnership, coordinated actions and the promotion of coping and adaptation measures that would help government and private actors find ways to protect and sustain Uganda’s pig value chain.

The event’s opening remarks by several high-profile government officials set the stage for the event, collectively driving home the role and importance of the pig industry in Uganda. Dr. Julius Okello, Team Leader Infrastructure at the Delivery Unit of the Office of the Prime Minister (OPM) cited low productivity as a barrier for growth as well as a lack of data to inform policy formulation and implementation. He emphasized the need for a national register of pig farmers as a starting point to consolidate data for the pig industry in Uganda.

Dr. Juliet Sentumbwe, Commissioner of Animal Production and Agriculture and Director of Animal Resources at Uganda’s Ministry of Agriculture, Animal Industry and Fisheries (MAAIF) seconded Dr. Okello’s call for more and better statistics, saying “we cannot talk about development when we do not have quantities or figures”. Dr. Sentumbwe also highlighted MAAIF’s strategy for mitigation and adaption to climate change, and encouraged collective action by all stakeholders to promote and implement Climate Smart Agriculture (CSA).

The final opening remarks were given by Hon. Mathias Kasamba, Member of Parliament, Chairperson of the Committee on Agriculture, Tourism and Natural Resources, East African Legislative Assembly (EALA), who appreciated the focus on the pig industry, but also encouraged stakeholders to consider other livestock industries such as cows, goats and rabbits, which collectively have the potential to meet demands for animal source foods both in Uganda and internationally.

What the science says

Dr. Birthe Paul, environment scientist at the Alliance of Bioversity, together with research associate, John Mutua, led the scientific briefing and presented the main research findings described in their recently published policy brief on heat stress. Dr. Birthe highlighted that although there is more research done on the effects of climate change on crops, “what we do know is that heat stress is among the most severe expected impacts.”

She recommended that heat stress risk be high on the agenda for Uganda’s pig sector. “Because of their physiological make-up, heat stress can cause a reduction in pigs’ growth, reproduction and health, and at times cause premature death.”

"According to current climate model projections, over 90% of districts in Uganda will experience severe heat stress conditions by 2100" said Mr. Mutua. "While the time horizon of the projections may feel long, northwestern parts of the country are already being affected by heat stress." 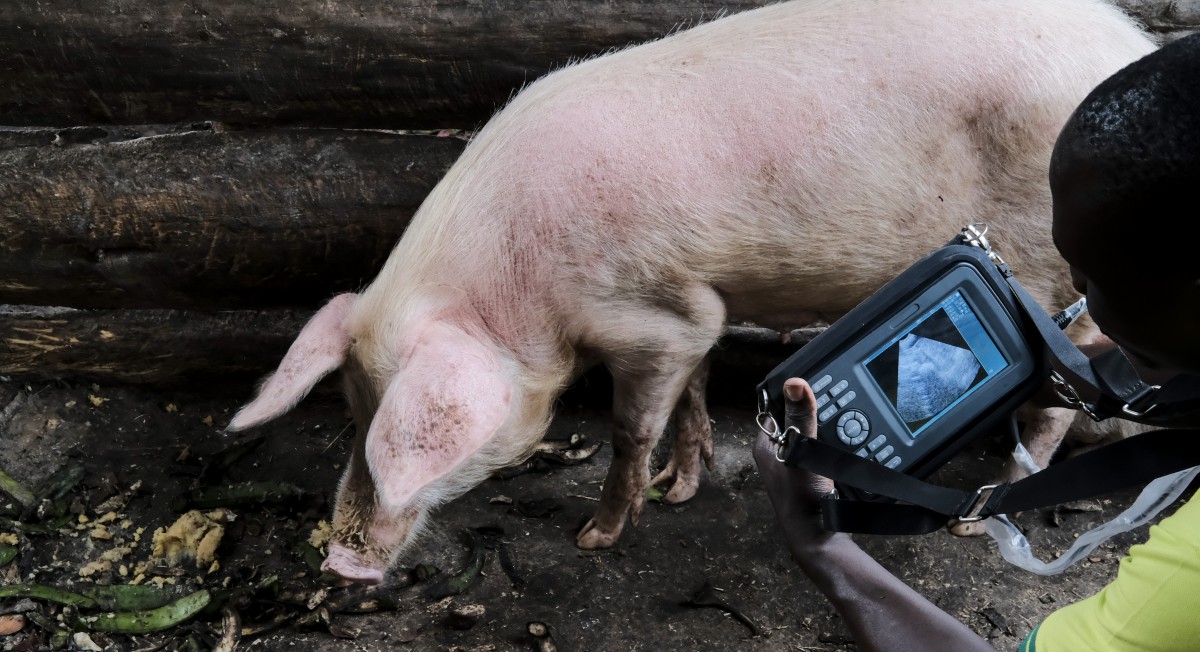 Heat stress can reduce growth, reproduction and health in pigs, putting at risk the livelihoods of pig producers and the sustainability of the pig sector as a whole. Photo K. Dhanji/ILRI

Uganda has already put in place policies and plans to support climate change adaptation. However, several key challenges remain. First, they are not specifically targeted to support piggery nor do they consider the impacts of heat stress. Second, the implementation of the jointly developed policies, strategies and plans remain unclear.

The science briefing opened up the discussion by expert panelists assembled for the event. These included Dr. Deogracious Wonekha from MAAIF, Mr. Derrick Senyonga from the Ministry of Water and Environment, Dr. Joshua Zake from Environment Alert and Dr. Emma Naluyima from the National Pig Multi-Stakeholder Platform.

Discussions focused on the additional impacts of climate change that would also affect the pig industry. This included unavailability of inputs, such as insufficient production of maize, which could result in competition between human and animal food and lead to livestock feed shortages. Rising temperatures and humidity could also see a rise in pests and diseases, affecting animal health and an increased demand for veterinary services, which many smallholder farmers are either unable to afford or access. Water availability was also cited as a big concern, with many current water sources drying up, thereby restricting access and driving up the costs of water.

Group photo of the participants at the heat stress policy engagement meeting held in Kampala, Uganda, on 10 December 2020. Photo CIAT/ILRI

The policy briefing closed with declarations of commitments by participants. Some of the high-level commitments included: raising awareness of heat stress, its impacts and policy recommendations at the highest level of government; a revision of policies and regulations on climate change to include all types of livestock – including pigs; prioritization of implementation of water programs for production; integrating the pig sector into national climate change adaptation and mitigation strategies as well as promoting more climate smart agriculture practices and programs across the country.

The outputs from this workshop will contribute to the overall MorePork program under the CGIAR Research Program on Livestock aimed at developing and testing an environmentally sustainable and gender inclusive integrated intervention packages to improve pig productivity and incomes of value chain actors. This policy briefing is part of an upcoming multi-stakeholder learning series around livestock and climate change.

Learn more about the policy briefing event and heat stress: