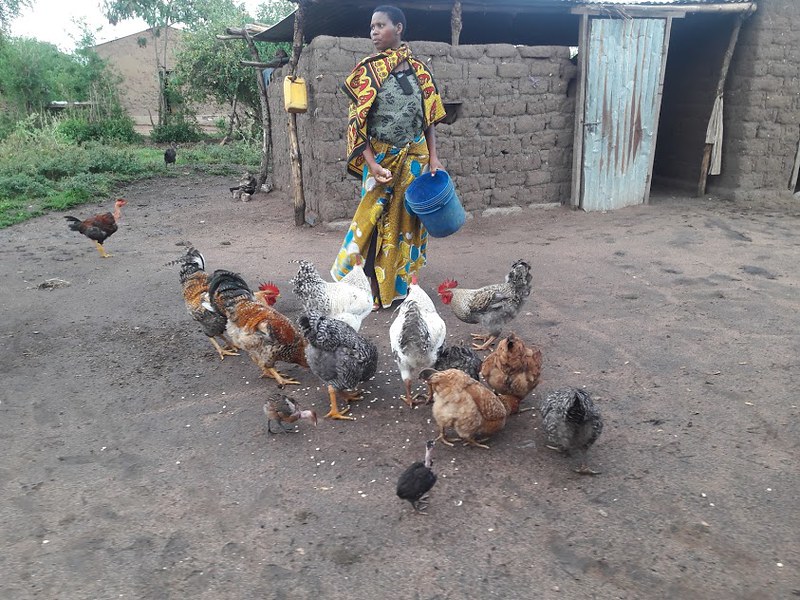 Last year, 1,746 smallholder farmers (80% women) in the five zones received a total of 32,000 Sasso chicks on 9–20 July 2016, and 11,224 six-week old Kuroiler chicks, in two batches, on 23–31 August 2016 and 20–28 November 2016. The farmers were responsible for feeding the birds using locally available feeds, and providing treatment and shelter under a semi-scavenging system. ACGG project field officers started collecting data the bird’s performance after six weeks. Data on body weight and mortality rates were collected after six weeks and information on the number of eggs laid and egg weight was collected from week 18.

The dual-purpose Sasso and Kuroiler breeds were found to have significantly superior performance compared to indigenous chicken under a low input production system. The results also showed that:

Following these promising results, TALIRI, the ACGG project and private companies—AKM Glitters, Nzua, Msigani Joint Venture and Silver lands Tanzania—are now collaborating to scale up the improved Sasso and Kuroiler chicken to more farmers and in different parts of Tanzania. As part of this activity, TALIRI and ACGG are providing technical support to establish and register a National Smallholder Poultry Forum that will bring together different actors in the sector.

To increase awareness of the benefits of these improved chicken breeds, the ACGG project, AKM Glitters and Nzua-Msigani JV jointly exhibited the two breeds to visitors at the 42nd International Trade Fair known as ‘SABASABA’ in Dar es Salaam on 28 June –13 July 2018.  The fair focused on ‘leveraging business for industrial development’ and it was promoting and scaling up the production and distribution of various technologies and livestock products for rapid industrialization and economic transformation in the country. More than 500 international and 2,960 local companies exhibited at the event which attracted 700,000 visitors.

Former president Mwinyi appreciated the role played by ACGG and TALIRI in engaging the private sector to produce and scale up Kuroiler chickens among smallholder farmers and other actors along the chicken value chain in Tanzania. Deputy minister Ulega said the collaboration between ACGG, TALIRI and the private sector is already availing improved chickens and chicken production technologies to farmers. He called for the wider adoption of these technologies in Tanzania.