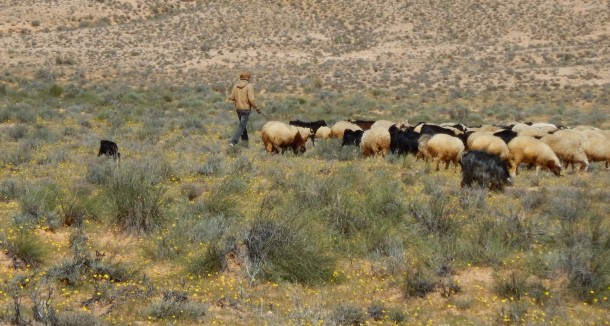 Degradation of rangelands is a major global concern, but land degradation processes in the rangelands are poorly understood. This lack of understanding has contributed to poorly-informed interventions and policies that have sometimes exacerbated degradation. Rangeland can become degraded due to crop cultivation, over-exploitation of livestock, over-extraction of woody biomass, and increased aridity owing to both climate change and extraction of water.

However, there are traditional historical rangeland governance practices that have allowed sustainable rangeland management in the dry areas for centuries. It’s called “Gdel.”

In Tunisian Arabic dialect, Gdel refers to the most ancient rangeland management practice through rangeland resting, which is a kind of deferment grazing. This traditional rangeland practice continues today in the central and southern part of Tunisia in the face of hostile national policies and severe rangeland degradation.

Gdel is a technique that prohibits domestic herds’ exploitation of collectively identified rangeland areas. It requires the communities’ agreement and sanctions at the same time. Rangeland resting has the ability to reverse grassland degradation and restore the land to its optimum productivity and biodiversity level.

During summer and drought, the practice of Gdel ensures basic forage reserve to cope with the climatic changes. This grazing management of private and collective rangelands was traditionally handled by “myaâd”— a meeting of tribal peoples in the office of the Omda. Within these meetings, the opening and closing dates of Gdel were agreed on each year. Once the decisions are taken, pastoralists cannot disagree. If they don’t obey the decisions, Omda would impose a fine on them in public. Gdel’s supervision is carried out by guards paid for by the community. There are at least eight guards equipped with mules for mobility.

The communities practice a two-season grazing system. For this purpose, the rangelands are divided into a summer pasture – on mountainous private rangelands – and spring, autumn, and winter pasture, which is called “collective rangelands of Dhahar.”

In Chenenni, a mountainous area in southern Tunisia, the privately-owned mountainous rangelands are banned from grazing between early fall and late spring – it is this exclusion that’s called Gdel. During the grazing-ban period, herds must leave, including even herds of the pastoralists that live normally inside the Gdel area. Perennial grass Stipa tenacissima harvesting is banned from March 20 annually in order to preserve it, as the plant has important economic and forage value (the plant is used for crafts, including basketry).

Once harvest is finished, around mid-June, the Gdel area opens for grazing.

The fall-winter-spring grazing happens roughly between September and early June. The herd then moves to the summer pastures – mountainous private rangelands – for about three months during the summer.

During severe drought, the communities stick to a three-seasons grazing system. The herd may remain on the mountainous private rangelands or be moved to the village, depending on the rangeland availability, as well as the size of herd, grazing meager pastures with barley supplementation.

Omda Mohammed’s best pastoral practices that have stood the test of time:

Best practices for throughout the year:

The survival of the traditional livestock-grazing system indicates that Gdel’s strategy of managing livestock and rangeland is well adapted to environmental conditions. ICARDA works together with the communities and studies their practices to inform and advocate policy change on sustainable management of rangeland resources. It will be the task of the policymakers to protect these traditional sustainable grazing practices and ensure that they are also updated to meet current requirements, including decentralization policies. Policymakers should define roles and responsibilities of the pastoral communities and those of the Tunisian authorities.

This article was originally posted on ICARDA’s website. Read the original article.