Livestock production is the main source of livelihood in the pastoral lands of Afar in northeastern Ethiopia. But the traditional livestock-keeping way of life there has been severely affected by a number of factors, including climate change, in recent years. Rainfall has become unpredictable, and the area has been hit by unprecedented droughts and floods. The traditional system of transhumance where pastoralists migrate annually to new grazing grounds is shifting or disappearing altogether, and pastures continue to diminish. To try and adapt to these realities, some pastoralists have been reducing the size and changing the composition of their herds. Many have moved from keeping large cattle herds to smaller, mixed herds with more goats and camels.

The consequent shift in animal browsing patterns and the reality of droughts and floods affect the remaining rangelands negatively, and improved, climate-friendly livestock management systems are urgently needed by pastoralists. 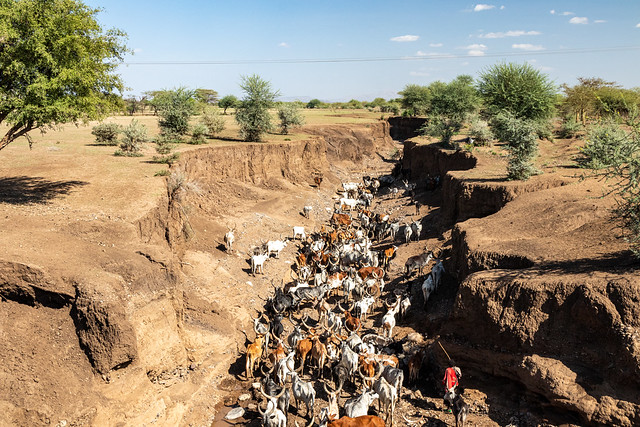 A herd of cattle searching for water in an almost-dry riverbed in Afar region, Ethiopia (photo credit: ILRI/ Sonja Leitner).

The Programme for Climate-Smart Livestock Systems (PCSL), which was launched in Ethiopia in early April 2019, aims to increase livestock’s contribution to the three pillars of climate-smart agriculture (CSA): increased productivity, mitigation of greenhouse gas (GHG) emissions, and adaptation to climate change across diverse livestock systems and agro-ecological zones. The four-year project is also being implemented in Kenya and Uganda. By developing new, more market-oriented pathways for climate-smart livestock management, the project will benefit governments, local livestock keepers, and the private sector.

Launched in Awra District of Ethiopia’s Afar Region on 4 December 2019, the PCSL is seeking to i) identify the key stakeholders to engage with during the project duration; ii) initiate relationships with these key stakeholders; iii) solicit inputs from the stakeholders regarding climate change and livestock production issues in the region; iv) inform local communities and government representatives on the planned data collection activities and field work.

The project launch meeting was attended by representatives of local governments of the zone, (Awra District, and Lekura and Hida Kebelles), non-governmental organizations (NGOs), pastoralists and researchers. 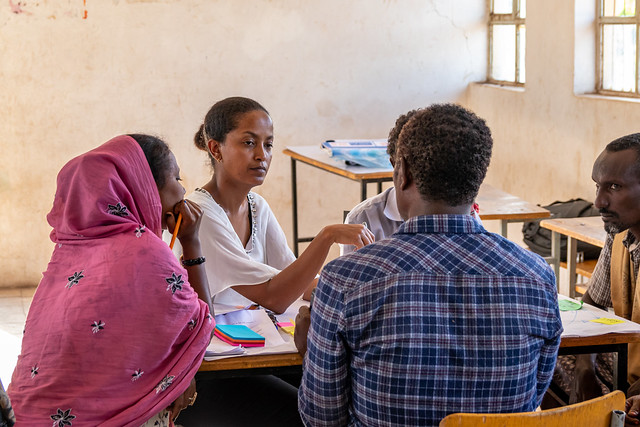 The PCSL team was represented by Birgit Habermann, Sonja Leitner and Tigist Worku who introduced the project and its activities in a series of brief presentations. The pastoralists wanted to know why their region has lacked rainfall in the last few years, which has transformed former grasslands into desert areas and dried up natural water sources.

Leitner explained that this was, at least in part, an impact of climate change, which can be seen in a decrease in rainfall and an increase in temperature. She also explained how a reduction in vegetative cover leads to a decrease in precipitation which alters the local climate. Finally, loss of vegetation and extreme rainfalls exacerbate soil erosion, further decreasing the available grazing area. She added that ‘in addition to climate change overgrazing and destruction of pasture and riverine forests may also have have contributed to accelerating land degradation’. Some solutions to the problems were proposed at the meeting including manure management, for instance by setting up biogas plants to reduce the pressure on woody vegetation, and a stronger focus on improving pasture quality, feed and forage availability. Revegetating the affected pastures was also suggested as an effective way of restoring rangelands. 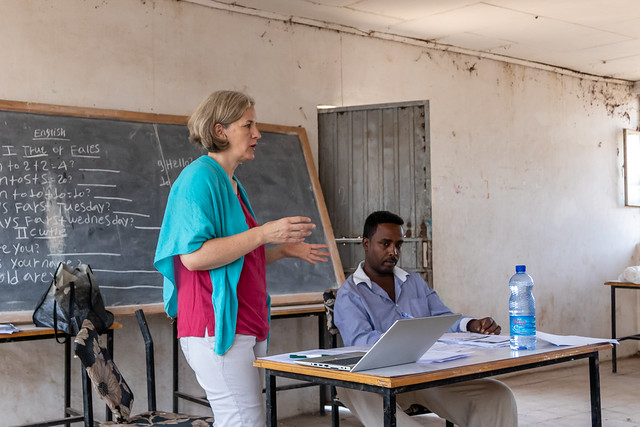 Workshop participants also wanted to know why the project had selected two kebeles with a large proportion of agropastoralists while most of the Afar Region is occupied by pastoralists. It was explained that the program is focusing on the alternative livelihoods (in addition to pastoralism) that can make it easier for pastoralists to adapt to climate change and still maintain their traditional way of living. Participants revealed that agropastoralists in the area were venturing into fruits and vegetables farming. They were also engaging in other activities such as selling and buying fodder, starting cooperatives, planting trees, collecting indigenous grass seeds, establishing water spreading weirs and exclosures as well as small-scale irrigation projects. They noted that while government initiatives still tend to have a strong crop focus, the importance of cattle in people’s lives is still high, especially in this region. ‘We live when our cattle live; if our cattle die, we die,’ was among the sentiments from participants.

After the project introduction and a question and answer session, workshop attendants participated in a net mapping exercise, where they reflected on and documented the most relevant and active actors in the development and implementation of climate change adaptation strategies for the livestock sector. Private sector representatives identified the government and NGOs as the most influential actors in the development of livestock interventions and livestock keepers as the most important actors in the implementation. Also, participants agreed on the mutual information flow among the three most important actors (government, NGOs and livestock keepers). Ministry of Livestock and Fisheries and some NGOs were identified as the main sources of funding for most of the livestock interventions.

After the net mapping exercise, participants worked in groups to help the PCSL team better understand community variability and how local livestock keepers can develop innovations and adapt to perceived challenges. Participants explained how the pastoralist way of life is being affected by climate change. While previously they had a biannual cycle of migration, today this is often disrupted and members of households are frequently separated, with part of the community (mostly young men) moving long distances with the livestock in search of pastures, while the elderly, women and disabled stay behind in settlements with only a few animals. In addition, participants clearly distinguished between the more successful pastoralists with larger, diversified herds (cattle, camels, sheep, goats) compared to those who are not fully committed and will easily sell off livestock for insufficient profit or suffer losses due to negligence in looking after the animals.

Overall, the participants showed a lot of interest in the program and its planned activities. It was mentioned severally throughout the workshop that livestock was at the heart of every pastoralist. The community members said they welcomed researchers who are working to develop recommendations that would help them adapt to changes in the climate and improve their animal productivity. Both pastoralists and government representatives pledged to support the PCSL hoping for feedback and findings that will enable them to improve livestock management in the region and the country.

After the successful project launch, the researchers will collect data from the field and facilitate stakeholders’ engagement on the issues raised during the meeting.

The PCSL is funded by the German Federal Ministry for Economic Cooperation and Development (BMZ) through the German Corporation for International Cooperation GmbH (GIZ).

This blog was co-authored by Birgit Habermann, a post-doctoral scientist working on innovation and social issues of climate change adaptation, Sonja Leitner, a post-doctoral scientist working on greenhouse gas emissions and climate change mitigation, and Tigist Worku, the project coordinator in Ethiopia. It was edited by Sarah Kasyoka and Paul Karaimu.

Visit: https://www.ilri.org/programme-for-climate-smart-livestock-systems to learn more about the project.

Comparison of knowledge, attitude, and practices of animal and human brucellosis between nomadic pastoralists and non-pastoralists in Kenya

END_OF_DOCUMENT_TOKEN_TO_BE_REPLACED

Funded by the Bill & Melinda Gates Foundation, the Agriculture to Nutrition (ATONU) project seeks to help the African continent broaden its agricultural focus from ‘eating for hunger’ to ‘eating for health’. It focuses on how agriculture can deliver positive nutrition outcomes for smallholder...

Research questions What is the net GHG balance for agriculture across Vietnam and where are emissions hotspots? What is the potential for mitigation, and where are the mitigation hotspots for rice landscapes? How do mitigation priorities and opportunities differ across farmscapes (e.g. Mekong delta...