Like many other rangelands in East Africa, the South Rift rangelands in Kenya’s Kajiado County are vulnerable to the effects of climate change. In the Ol Kirmatian and Shompole group ranches in Kajiado, pastoralism is the predominant means of livestock production and over the years the pastoralists here have put in place various measures of dealing with seasonal changes. But in the face of a changing climate and weather variability, it is increasingly harder for them to rely on previous strategies of managing their rangelands. Fluctuations in pasture and water availability and increasing incidences of livestock diseases are some of the current impacts of climate change in the area. These have, in turn, influenced livestock migration patterns and increased human-wildlife conflict. Furthermore, these changes are interacting with other changes in the environment such as the spread of Prosopis juliflora, an invasive shrub that is poisonous to livestock, which is degrading the pasture lands. All these factors have an overall negative impact on the productivity of livestock in the county.

As part of efforts to build the capacity of pastoralists and livestock sector stakeholders to respond and adapt to these changes in climate change in Kajiado’s rangelands and other livestock production systems in eastern Africa, the International Livestock Research Institute (ILRI) is implementing the Programme for Climate-Smart Livestock (PCSL) in Ethiopia, Kenya and Uganda. 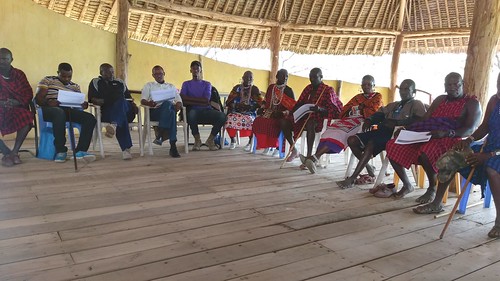 Members of Ol Kirmatian group ranch in Kajiado County, at a meeting organized by the Programme for Climate-Smart Livestock on 25 June 2019 (photo credit: ILRI/ Lucy Njuguna).

a)     identifying and field-testing innovations for adapting to, and mitigating, climate change as well as determining the necessary factors for effective adoption,
b)    facilitating participatory development of adaptation actions recognizing plausible future scenarios, and
c)     supporting the capacity of actors to track and report on efforts to adapt to climate change and mitigating greenhouse gas emissions.

In Kenya, the project is being implemented in two agroecological zones – pastoral and semi-intensive dairy systems. Research sites in Kajiado County and ILRI’s Kapiti Research Station will represent pastoral/rangeland systems whereas the semi-intensive dairy systems will be represented by research sites in Nandi and Bomet counties. Following the project launch in March 2019 and consultations at the national level, the project team has been holding meetings at the county and community levels to create awareness of its work among local stakeholders and to discuss implementation strategies.

On 20 January 2020, the PCSL team met with representatives of the Ol Kirmatian and Shompole ranches and other stakeholders in Kajiado. The two community ranch management committees, the South Rift Association of Landowners (SORALO), representatives from the local administration and leaders of women’s groups attended the meeting. They discussed how the findings of an ILRI research project in the area and future research could better benefit the communities. The initial findings of the project, which assessed the potential for resting and re-seeding grazing areas during short rains and long rains and their impact on pasture quality, were reviewed. Participants said they were willing to adopt some of the measures proposed by the researchers including resting rainy-season grazing areas for longer or shorter periods (depending on rainfall), range re-seeding, using manure to improve the re-seeding success, and producing grass seeds locally. At the end of the dialogue, the project team and the community representatives formulated an action plan which will guide the program activities in Kajiado. 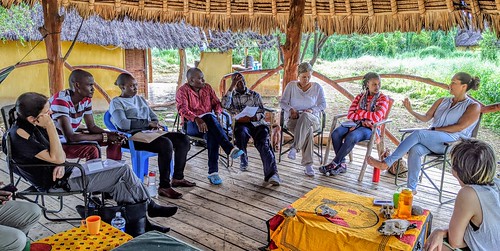 Key features of the plan will include setting up partnership arrangements with the community and building on the already existing long-term collaboration between ILRI and SORALO. A follow-up meeting with community members later discussed the research activities that would be carried out in the area by the PCSL. The researchers and students (masters and PhD) were introduced to the community at the event. They each presented the research objectives of their component, expected results, data collection activities and the areas where they will need community support. They also responded to questions from community members on the proposed program activities and explained how the program’s work will benefit the people of Kajiado.

The extensive consultative meetings with the local stakeholders have revealed the importance of creating a common understanding of the project goal and how its activities will benefit communities in the project sites. This shared understanding of project purpose motivates livestock keepers and stakeholders to engage actively in the project activities and increases their likelihood of applying the project’s findings. The consultations have also enabled the project staff to address the concerns of communities, to understand the local dynamics that are crucial to project success and to co-develop project implementation modalities. This process has also helped to demonstrate the value of the communities’ ownership of the research activities, recognizing them as equal partners. The PCSL research activities in the area will be carried out over the next two years.

The PCSL is financed and coordinated by the German Corporation for International Cooperation GmbH (GIZ), commissioned by the Government of the Federal Republic of Germany.

This blog was co-authored by Leah Gichuki, a research associate and Lucy Njuguna a PhD student, both working on climate-change adaptation. It was edited by Sarah Kasyoka and Paul Karaimu.

Visit: https://www.ilri.org/programme-for-climate-smart-livestock-systems to learn more about the project.

Comparison of knowledge, attitude, and practices of animal and human brucellosis between nomadic pastoralists and non-pastoralists in Kenya

END_OF_DOCUMENT_TOKEN_TO_BE_REPLACED

In sub-Saharan Africa, livestock is crucial for the livelihoods of more than 80 per cent of households that are classed as poor. As a result of a growing population, increasing income and urbanisation, demand for livestock products is rising steadily. Climate change has a negative impact on...

Climate change represents a major threat to global biodiversity and in the Serengeti-Mara ecosystem, it is apparent as increased variability and irregularity of rainfall. Africa harbours the fastest growing human population in the world and the pressure on natural resources in the Serengeti-Mara...

Strategies for effective linkage of science, policy and practice for climate change adaptation

The challenge of designing effective policies for rural and agricultural development ins sub-Saharan Africa is rendered even more complex by the urgent need to promote climate change adaptation. Specific climate change policies and Programs of Action are being developed, and climate change is...