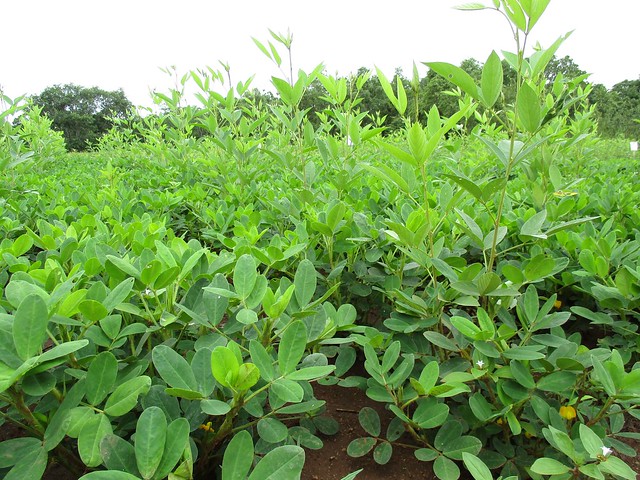 Smallholder farming systems in southern Africa are faced with challenges such as declining soil fertility, low productivity and profitability and the increased need to adapt to climate variability and change. Sustainable intensification of both legume- and maize-based farming systems is needed to increase food, nutrition and income security for smallholders.

Since 2015, the Africa RISING team working in the Eastern Province of Zambia has tested doubled-up legume systems with groundnuts and pigeon pea under different spatial arrangements. These were planted under conventional as well as conservation agriculture (CA).

The doubled-up legume system in CA is premised on the belief that while farmers will be in a position to get the usual benefits of the doubled-up legumes (‘double’ the grain output per farm, hence more food and also ‘double’ soil fertility through the leafy biomass components of groundnuts and pigeon pea); they will also potentially benefit more from increased moisture retention towards the end of the season as well as reduced labour in land preparation, if the backbreaking conventional tillage practice of ridging can be avoided.

Growing doubled-up groundnuts without ridges under CA also gives more flexibility to increase the groundnut population, which will benefit farmers even more through reduced soil erosion and less rosette disease (which is caused by the groundnut rosette virus in sparse plant populations).

Key results from this work so far

The Catholic Relief Service (CRS) has already started to take the results of this study into their future programming. A potential link to the Indian pigeon pea market that already exists in Malawi will further benefit smallholder farmers to increase the profitability of their current farming systems.

Written by Christian Thierfelder, of the International Wheat and Maize Improvement Center (CIMMYT).

END_OF_DOCUMENT_TOKEN_TO_BE_REPLACED

Between 2010 and 2015, the Sustainable Rangeland Management Project (SRMP) assisted nine villages to carry out VLUP, and successfully piloted the implementation of joint village planning across three of these, leading to the protection through certification of a shared grazing area called OLENGAPA...