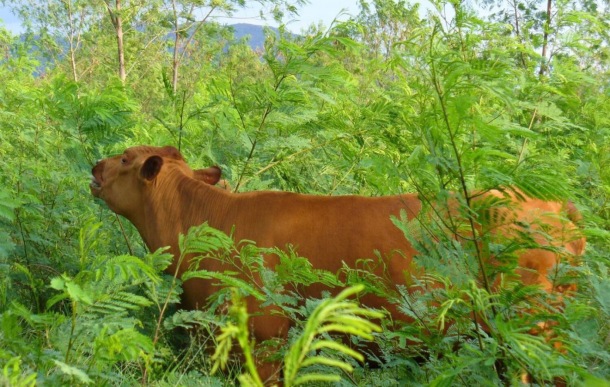 Over 100 scientists, extension workers, farmers and private seed producers from Australia and around the globe are gathered this week at the University of Queensland to share knowledge and findings on the humble yet hardy legume shrub called Leucaena.

Aimed at livestock and agroforestry industry audiences, the first day of the International Leucaena Conference kicked off today with discussions on advances in breeding and evaluation, management of plantations and use of leucaena as feed for animals. Alternative uses of leucaena are covered during the 3-day conference, such as for timber, paper pulp, bio-fuel, medicine and anthelmintic purposes, along with opportunities for land regeneration, carbon sequestration and methane reduction.

Leucaena is widely recognized as the most sustainable, and valuable multipurpose tree legume in the tropics. For livestock, it provides a productive and profitable source of protein for ruminant production.

Livestock CRP’s Feeds & Forage flagship leader, Michael Peters, and Stefan Burkart, scientists from CIAT, presented their paper on the Economic Analysis of Leucaena diversifolia in beef cattle production systems in Colombia. The study evaluated the profitability of including Leucaena diversifolia in the Colombian cattle production system. It also examined barriers to adoption, attributing these to limited knowledge or access to credit, and an information gap on its economic viability.

Results indicated that inclusion of L. diversifolia is financially profitable, showing it has significant potential to increase both animal productivity and profitability, which is conducive to the sustainable intensification of meat production in grazing systems. Comparisons were made against Brachiaria hybrid grass-legume developed by CIAT and Cayman grass monoculture in the Colombian Cauca Valley, both with the purpose of bovine meat production. Download summary here

Over the past three decades, scientists and farmers have greatly increased their knowledge of this plant, resulting in new plantings that have grown almost exponentially over time. This has led to a demand for improved knowledge of the latest varieties, recommended management practices, and feeding systems.

The last conference of this kind dedicated to leucaena was held in Vietnam in 1997.

END_OF_DOCUMENT_TOKEN_TO_BE_REPLACED

Development of new forage genetic resources and their ultilization

The knowledge generated from this work allows scientists to identify genotypes that have potential as livestock feed. It also allows them to conserve essential forage biodiversity for current and future generations as global public goods. The major focus of forage research is to characterize the...

FTF-MLTS strives to reduce the productivity gaps and expand the volume and value of ruminant livestock produced and marketed by 61,000 households in 31 FTF focus communes in Sikasso, Mopti and Timbuktu. To achieve this, FTF-MLTS is promoting the wide-scale dissemination of productivity enhancing...