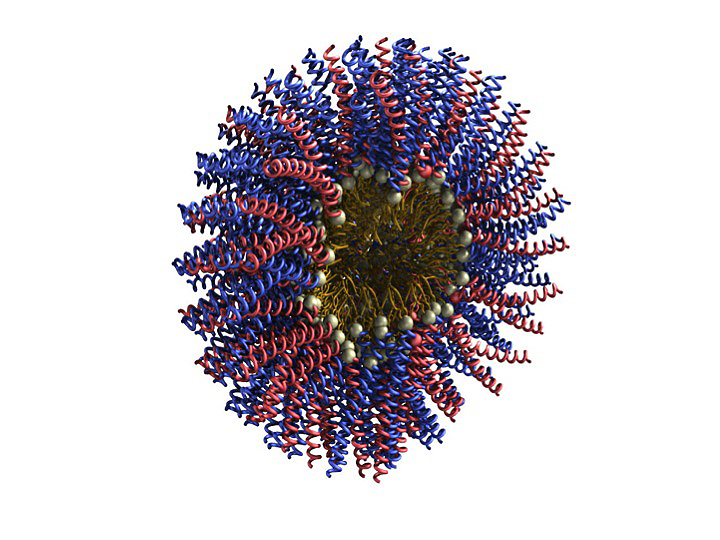 Artistic render of a nanoparticle (photo credit: University of California at Berkeley/Mathew Tirrell)

Smaller than 100 nanometres in diameter—about 60 times smaller than the width of human hair and comparable in size to microscopic structures within cells—synthetically produced nanoparticles are readily incorporated into biological systems. These ‘ultrafine particles’, which can be produced using several methods, are of increasing scientific interest. Very stable and harmless to plants and animals, synthetically produced nanoparticles have diverse applications. They can make food packaging more durable, for example, and food containers coated with silver nanoparticles can kill bacteria. In medicine, nanoparticles are being used to develop new vaccines, drugs and diagnostic tools. In biological applications, nanoparticles can be linked to biological molecules that can act as address tags, to direct the nanoparticles to specific sites within the body, specific organelles within the cell, or to follow specifically the movement of individual protein or molecules in living cells.

Scientists at the International Livestock Research Institute (ILRI) are using nanotechnology in research on vaccines to protect livestock against diseases such as East Coast fever, which kills cattle in 12 African countries, impoverishing the livelihoods of livestock farmers and herders and causing economic losses of more than USD300 million each year. East Coast fever is caused by a parasite known as Theileria parva which is transmitted to animals by the bite of an infected tick. The only available method of immunizing cattle against this commonly fatal disease is by administrating a ‘live vaccine’, which presents several major challenges. For this reason, scientists at ILRI (Kenya), the University of Queensland (Australia), the Institute of Tropical Medicine Antwerp (Belgium) and the University of Washington (USA) have been collaborating on developing improved vaccines using nanotechnology.

Anna Lacasta, a scientist in ILRI’s Animal and Human Health program, uses nanoparticles as carriers of parasite antigens, molecules foreign to the animal host, in an effort to increase the protective immune responses of the animals to the parasite antigens, thereby enhancing the level of immunity of vaccinated animals to disease.

The ILRI team has been systematically testing different nanoparticle-based vaccines using a Theileria parvaantigen called p67C. Immunization with nanoparticles resembling virus-like-particles (VLPs) generated the best antibody responses, although this was dependent on the specific type of VLP used. By contrast, silica-based nanoparticles generated the best cell-mediated immune responses. Using the latter in combination with a VLP produced high levels of both types of immune responses (antibody and cell-mediated) and also induced the highest level of immunity to East Coast fever achieved to date. However, the studies still need to define the best Theileria parva antigens to use and whether one or a combination of nanoparticles will be required to optimize vaccine design and an immunization regimen, research work that will require mobilizing additional financial resources.

‘By presenting the p67C antigen in a particulate form, we are increasing the magnitude of the immune system to recognize and react to candidate vaccine antigens, relative to that of the non-particulate form of p67C’, says Lacasta. She further added that these studies have opened up opportunities to address other disease constraints through development of next-generation vaccines. ‘We hope to apply nanoparticle technology—nanovaccinology—in work on other livestock diseases in the near future.’

Watch the SciTalk on Nanoparticle technology to improve immunogenicity of p67C