Livestock route mapping for improved health of humans, animals and the environment

Pastoralism is an effective and productive livelihood system that makes the best use of variably distributed natural resources in often dry rangeland areas where it has a particularly strong comparative advantage over other land uses. In order to function well, pastoralists and their livestock need to move across the rangeland landscape to access grazing, browse, water and minerals as well as services such as markets. Any intervention that seeks to assist pastoralists needs to understand these movements and how best to support them.

The One Health Units for Humans, Environment, Animals and Livelihoods (HEAL) project applies a One Health approach to human health, animal health and the environment, because they are all connected.

In the HEAL project, the environment is primarily considered to be ‘the rangeland,’ though other aspects of environmental health are also being considered: healthy rangelands lead to healthy livestock, which leads to healthy people. The project, which works in Ethiopia, Kenya and Somalia, will be supporting communities to better plan, manage and protect their rangelands and natural resources through participatory rangeland management (PRM), a process that has been shown to improve the access of communities particularly women to natural resources, and to improve the productivity and ‘health’ of the rangelands.

A related project, the Health of Ethiopian Animals for Rural development (HEARD) project has activities that aim to strengthen veterinary services, for which it is pivotal to understand where and what animal health services are needed including in pastoral areas.

Both the HEARD and HEAL projects are working towards improving animal health services. The latter having a broader focus where it applies a One Health approach to humans, environment, animals and livelihoods.

As a first step in the planning of both these projects, the ILRI, Vétérinaries Sans Frontières Switzerland and Comitato Collaborazione Medica carried out a participatory mapping of livestock routes in the projects intervention areas in Somali and Oromia regions from 3-9 December 2019. The exercise was undertaken in workshops attended by community leaders, relevant government officials, and rangeland experts. The mapping was done using topographical maps on which participants mapped out the livestock routes, livestock infrastructure and key grazing areas. The maps were then digitized. Eventually these maps will feed into the PRM process including defining a rangeland management unit, a rangeland management plan including movements of animals among grazing areas, and mapping out disease hotspots. 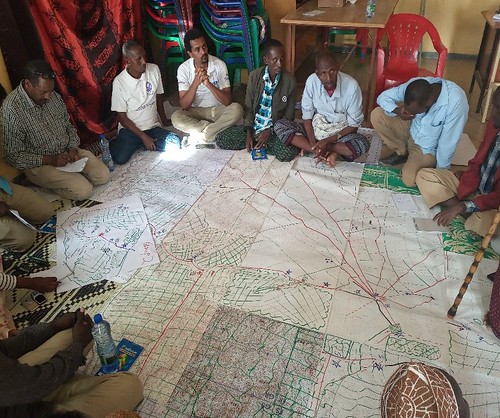 The mapping work helped the projects to better understand livestock movements, where the routes are and where they converge, the existing livestock infrastructure and services and where there are gaps. This will help HEARD and HEAL to better plan their interventions and ultimately provide better access to services for pastoralist communities in the three countries.

HEAL is funded by the Swiss Agency for Development Cooperation, the European Union, the Italian Cooperation, CGIAR and the Office of US Foreign Disaster Assistance and implemented by Vétérinaries Sans Frontières Switzerland (lead agency), Comitato Collaborazione Medica and ILRI. It works in Oromia and Somali regions of Ethiopia, Marsabit County of Kenya, and Gedo Region of Somalia. The mapping exercise will be repeated in Kenya and Somalia over the coming months.

HEARD is a European Union-funded project implemented by ILRI and the Ethiopian Veterinary Association (EVA). It works in Somali, Amhara, and Oromia regions of Ethiopia.