Feed quality is a critical issue for livestock production across the developing world. With better feed, livestock are both healthier and more productive, meaning more food can be produced on less land and with lower greenhouse gas emissions.

But most livestock keepers across sub-Saharan Africa and South Asia lack information about the quality of the feed they use. In these areas, livestock are usually fed opportunistically on a range of feeds including crop residues, pasture, tree foliage, agro-industrial byproducts, and in some cases on feed concentrates.

The quality of this feed can be extremely variable, even within feed types: pasture quality, for instance, varies greatly depending on its age.

‘At the moment, there are a lot of assumptions, a lot of firmly-held beliefs about how much protein or how digestible a particular feed resource is,’ said the International Livestock Research Institute (ILRI)’s program leader for feed and forage development, Chris Jones. ‘So, when people feed animals and they try and mix rations to give the optimum amount of fibre and protein, they usually do it as a guesstimate.’

Feed quality can be accurately assessed using traditional ‘wet chemistry’ methods in laboratories, but existing methods of doing so are time-consuming, costly and require specialist skills. What’s more, the chemicals and equipment required are often difficult to source and maintain in developing country contexts.

‘In a wet chemistry lab, fibre [evaluation] needs its own machine, crude protein needs another – you need a whole lab full of machines that evaluate different components of the feed,’ said Mulubrhan Gebremikael, research coordinator for the University of Florida-led EQUIP – Strengthening smallholder livestock systems for the future project, which is stimulating advances in NIRS use in sub-Saharan Africa.

‘In many countries in Africa, these machines are usually obtained through grant funds, and once the projects are over, you don't have any connection with providers of the machine – so when they break, it’s very difficult to get them fixed.’

That’s why ILRI researchers, in collaboration with a range of partners, are promoting the use of a technique called near infra-red reflectance spectroscopy (NIRS) to help make feed assessment simpler, cheaper, and much more widely accessible.

For NIRS analysis, samples are first chopped, ground and sieved to produce a uniform dried feed sample. This is then presented to a scanning instrument to shine a light at it and track the characteristics of the light that’s reflected back. The results are then calibrated using a set of equations for the specific feed type – gained initially using wet chemistry processes – that reveal various properties such as protein, fibre, and energy content. ‘It’s a quick and non-destructive way of assessing quality,’ said Alan Duncan, Principal Livestock Scientist at ILRI.

Once a NIRS machine is in place, it can scan high numbers of samples per day at very little cost. ‘With wet chemistry, you can only analyse around 50 samples in a month, whereas in the case of NIRS, you can analyse 3000 samples in the same time period,’ said Padmakumar Varijakshapanicker, who is the acting head of ILRI’s feed technology research platform in Hyderabad, India.

With correct calibrations, NIRS can also supersede wet chemistry in terms of the results’ quality, said Gebremikael. ‘Because of all of the equipment challenges we have in wet chemistry labs in many parts of Africa, most results are not as accurate as they should be,’ he said, ‘whereas if you are careful, NIRS provides very good accuracy. We think it has the potential to transform the food sector in terms of measuring feed quality.’

Who wants to know about it?

The technique has received considerable interest from crop breeders, especially as whole-plant utilisation, which considers crop residue quality as well as grain yield, gains support. ‘It’s interesting because dual-purpose crops is still an emerging concept – people still find it difficult to understand that you can select for improved feed as well as improved grain quality – but the plant breeders are really sold on this,’ said Jones.

‘If you want to analyse the crop residue quality before releasing a new variety, you have to analyse a large number of samples,’ added Padmakumar, ‘and depending on wet chemistry for this is particularly expensive and time-consuming: it’s in this context that NIRS assumes its importance.’

ILRI facilities currently process about 15-20,000 samples per year, and demand is rapidly increasing. Animal nutritionists and feed manufacturers have also shown interest in the tool, as well as farmers themselves.

But Gebremikael emphasised that awareness-raising on the benefits of improving feed quality is still an important and ongoing journey. ‘The fact that this technology exists doesn't mean it will be taken up by farmers or traders,’ he said: ‘we need to create awareness and knowledge.’

In Ethiopia, for example, an EQUIP study found that there was no direct relationship between price and quality. ‘Farmers would pay the same amount for a low quality – sometimes spoiled and toxic – feed as a high quality one: there is little understanding of how that quality affects the milk and other products,’ said Gebremikael. ‘Unless we develop that, there is no point in bringing in NIRS.’

That’s why his team is initially focused on targeting professional societies and commercial farmers, who already have some awareness about the importance of feed quality. ‘The hope is that once they are really taking [feed quality] into account, the rest of the community will begin to learn from this, too,’ he said.

Another important element of using NIRS to improve feed quality is having a well-connected international community of practice, said Gebremikael. ‘If there is an advanced lab in our network, it means we can all access their resources – particularly the calibration equations – from other labs, and we don’t need to be doing all the work ourselves.’

To this end, ILRI and its partners have recently established a network of NIRS instruments, to allow rapid and inexpensive analysis of livestock feeds in India, East Africa and West Africa. This network was recently extended with a new NIRS instrument being transferred to the Environmental Institute for Agricultural Research (INERA) in Burkina Faso. 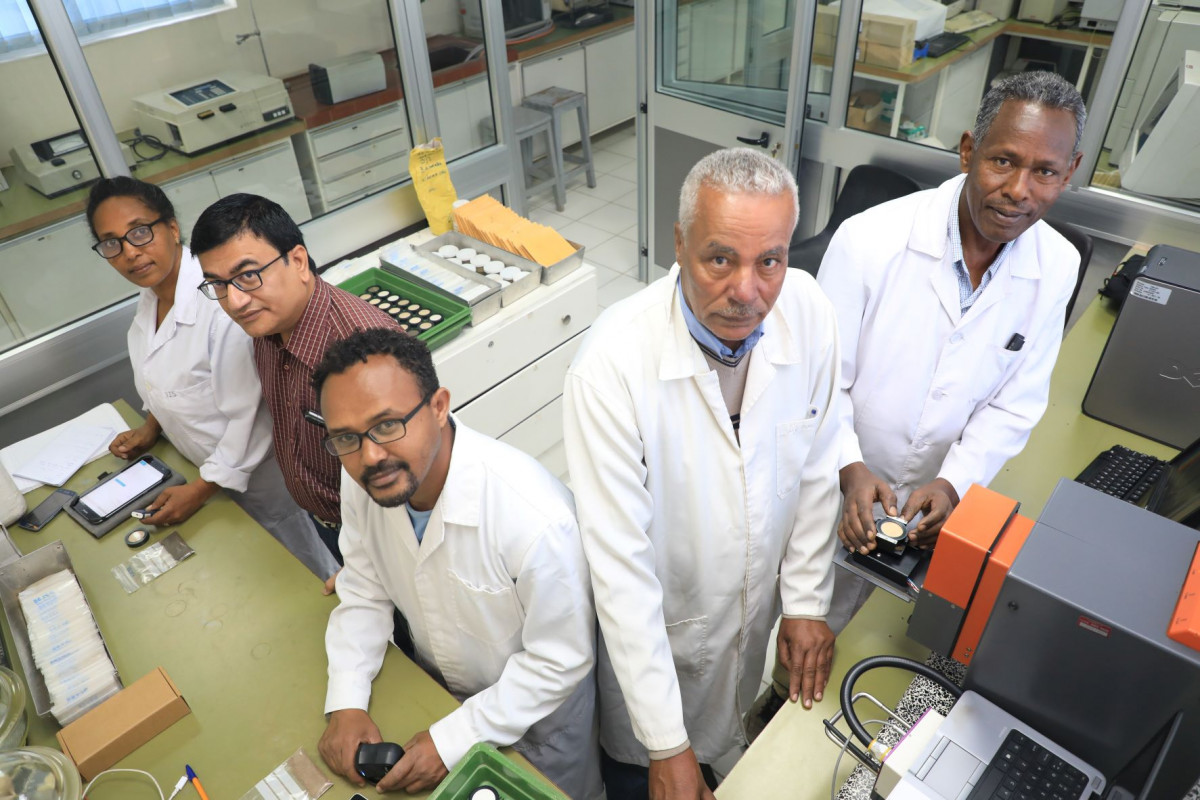 The team in the NIRS room of the nutrition lab in ILRI’s campus, in Addis Ababa, Ethiopia, The small round containers are sample cups being prepared for loading into the FOSS instrument for sampling. Photo ILRI/Apollo Habtamu

‘Previously, we had to send many of our samples outside of Burkina Faso – often to Europe – to get them analysed,’ said Nouhoun Zampaligré, a ruminant nutritionist at INERA. ‘It’s great that the capacity is now there, using NIRS, to help researchers, government and the private sector to get results quickly.’

That’s prompting the government to move ahead with nutritional labelling requirements for animal feed sold within the country. ‘The ministry has been delaying the implementation of this regulation,’ said Zampaligré, ‘but now they’re ready to push the farmers and the producers [to assess and label their feed], because the capacity is there now that they can come to INERA and get their feed analysed.’ The development has also made Burkina Faso into a regional ‘node’ for NIRS, with the INERA lab now fielding samples from neighbouring West African countries, too.

New hand-held NIRS instruments have recently been developed, and these have the potential to upscale the reach of feed analysis even further. At around USD 2000, they’re vastly cheaper than benchtop NIRS instruments, which retail for around USD 60,000, and their size and portability further facilitates mobile use by private feed manufacturers.

At present, the hand-held devices still require samples to be dried and ground, but the technology is now being developed to work in situ on standing crops – a progression that the researchers find very exciting. ‘If you’ve got a population of plants and you can identify which one is the highest quality just by pointing a little light at it, that’s fantastic: it saves you a lot of time and effort,’ said Duncan.

Ultimately, the scientists would like to see vendors and farmers equipped with the knowledge, tools, and data to make accurate assessments and decisions about feed quality themselves. ‘If farmers have the right information about the feed they are using, then they’ll feed their animals better and they’ll be more productive,’ said Zampaligré: ‘and that means more income and a better life.’