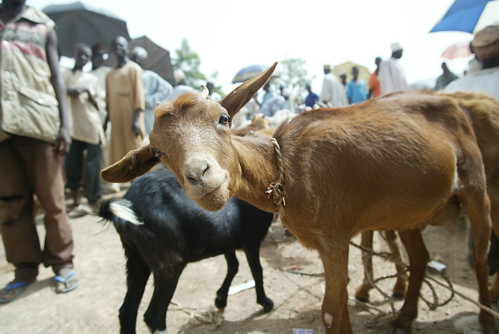 Goat in a market in Nigeria (photo credit: ILRI/Stevie Mann).

Foodborne disease is a major public health problem in poor countries, but we lack effective, sustainable and scalable approaches that work in the traditional, informal markets where most fresh, risky food is sold.

A promising intervention is working with informal sector vendors to provide training and technologies, an enabling environment, and motivation for behaviour change.

A case study published in the March 2019 issue of the journal Infection Ecology & Epidemiology presents a long-term follow-up of a pilot project to improve food safety in Bodija abattoir and meat market, one of the largest markets in Nigeria.

The policy environment had become disabling, partly because of attempts by the authorities to move butchers to a modern, hygienic but more distant abattoir; this was resisted by the butchers.

The case study shows the importance of an enabling environment and need for stakeholder collaboration in attempting to improve food safety in the traditional sector.

The use of antibiotics for therapeutic purposes in pig production in Bac Ninh province, Vietnam

END_OF_DOCUMENT_TOKEN_TO_BE_REPLACED

The Food and Agriculture Organization of the United Nations and the World Health Organization listed the top 10 foodborne parasites of global concern in humans, with cysticercosis (caused by Taenia solium ) ranked the highest and trichinellosis (caused by Trichinella spiralis ) seventh. Human...