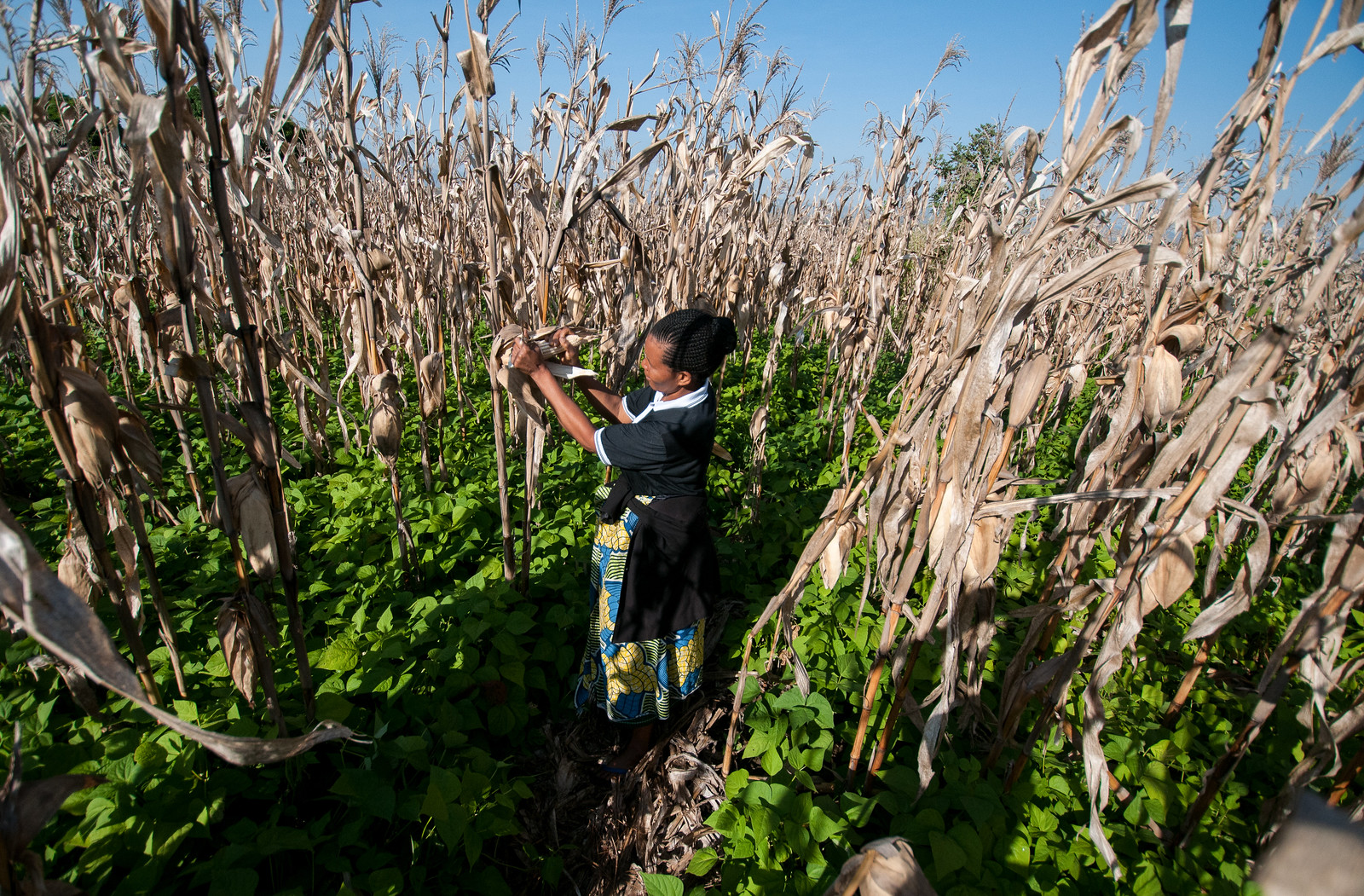 A farmer in Tanzania harvests maize. The beans which was intercropped with the maize will also be ready for harvest soon (photo credit: Georgina Smith/CIAT).

Babati, a district in northern Tanzania, thrives on an agricultural economy. In the mostly smallholder farming community, maize, beans and pigeon pea are the major crops. While maize yields are mostly low to moderate, low legume yields are common.

Declining soil fertility, changing weather patterns and use of improper field management practices are important factors that have negatively contributed to low crop production in this region.

Nutrient deficiency, especially of phosphorus and nitrogen, has also been identified as contributing to suppressed yields and resulting in low returns from agricultural investment. In addition, secondary nutrients like sulphur and micronutrients like zinc are also limiting crop production in the district. A study by the Alliance of Bioversity International and CIAT found that less than 3% of farming households were applying inorganic fertilizers to improve crop productivity as of 2014. About 46% of farmers also rely on manure as a major source of nutrients, applying 1.4 tons of manure per acre per year on average. This amount of manure is not enough to sustain crop production and over time results in nutrient mining, as plants take up nutrients out of the soil, are harvested and additional nutrients are not applied as replacement. Most of the manure applied is usually poor in quality and provides about 4.2 kg of nitrogen (N) and 1.4 kg of phosphorus (P) per ton of manure applied.

Since then, the Alliance through Africa RISING (a United States Agency for International Development (USAID)-funded project), has partnered with Minjingu Mines & Fertilizer Ltd, a leading rock phosphate fertilizer producer in East Africa, the Tanzania Agricultural Research Institute (TARI) and the Babati District Council to investigate the changes in productivity that can be achieved with proper nutrient applications. The partnership also included key seed companies such as Meru Agro and Aminata Seeds.

‘Scientists from the Ministry of Agriculture are happy to see farmers taking up new technologies introduced through the ongoing partnership. When scaled out and widely adopted, the innovations within this project will transform smallholder farmer livelihoods in Babati District.’ Prosper Massawe, head of Natural Resource Management in TARI-Selian

Experimental research conducted through the partnership in 2014 and 2015 established that 20 kg of N and 8 kg of P per acre is required for increased maize yields and that supplying P from either Minjingu fertilizer or DAP achieves largely the same results.

Since then, Minjingu Mazao fertilizer, used in the initial tests alongside DAP, has been improved through enrichments with essential micronutrients such as zinc (0.5%) and boron (0.1%) in what is now called Minjingu Nafaka+. This new fertilizer blend doubled maize yields from 5 to 10 bags per acre in 2019, a season that was characterized by inadequate and poorly distributed rainfall. This was without top-dressing because of the drought experienced.

Increased production cannot be achieved solely by addition of fertilizers and/or manure. Proper spacing i.e., 75 x 25 cm in a pure maize system and 90 x 50 cm in a maize pigeon pea intercrop (2 maize plants per hole) is equally important, as are other good agronomic practices.

Combination of fertilizers and good agronomic practices (mainly proper spacing) last year increased maize yields by up to 15 bags in Gallapo, 16 bags in Riroda and 30 bags per acre in Sabilo compared to farmer practices where seeds were sown behind the plough and no fertilizer applied (see photo and figure below). Participatory economic assessment by farmers and researchers conducted in different years of the project implementation also showed that with such production increases, farmers can easily break even especially during a good season. Productivity under current farmers’ practices is on average only 8 bags of maize per acre. 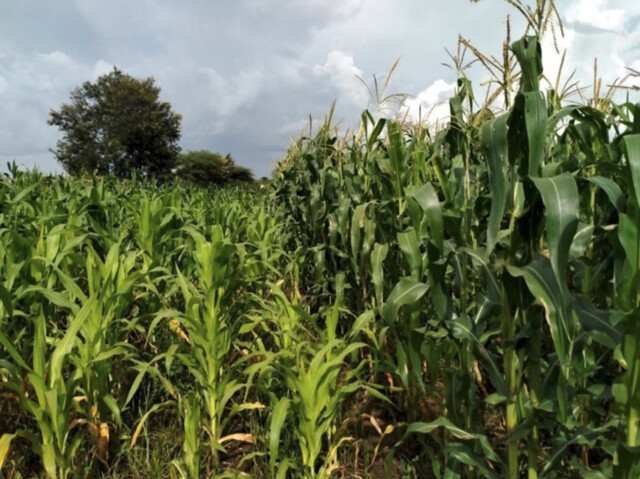 “Farmers need to feed their soils with Minjungu fertilizers in order to feed the nation,’ said Anup Modha, the general manager of Minjingu Mines & Fertilizer Limited, when he donated fertilizer to the 150 farmers testing the new agronomic innovations in Gallapo, Riroda and Sabilo villages of Babati. 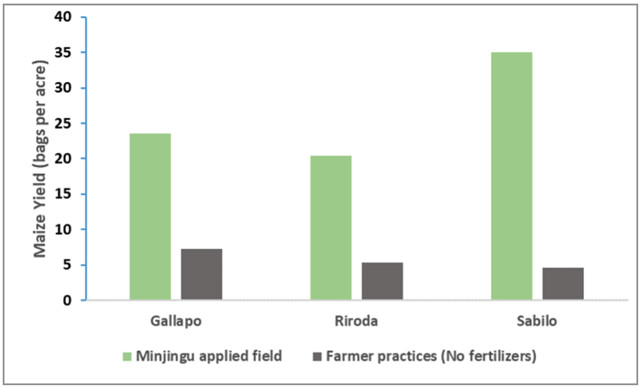 Various activities have tried to address the challenge of low yields of legumes grown in intercrops with maize. Two new intercropping innovations developed and now undergoing field testing in three villages of Babati are showing promises to reverse farmer fortunes.

Mbili-Mbili, a maize-bean-pigeon pea intercrop system, and Doubled-up legume, a bean-pigeon pea intercrop are now in their third year of field testing. ‘Mbili’ was first developed in Kenya and involved intercropping of only one legume species. The technology has been advanced to ‘Mbili-Mbili’, which accommodates two legume species i.e., beans and pigeon pea, commonly grown by farmers in Babati. Doubled-up legume was innovated to increase production of pigeon pea under groundnut/soybean systems in Malawi. The system has now been tailored to integrate pigeon pea into bean monoculture systems of Babati. Both systems are improving legume production by reducing competition for moisture, nutrients and light from maize.

Local farmers are equally playing active roles in testing of the two new technologies. In 2019, 99 farmers participated in testing the performance of Mbili Mbili. The participation increased to 150 farmers in the 2020 season due to the growing interest from farmers. A growing farmer interest to try out new agronomic practices has been observed since 2013, a year where farmers expressed fear that soils will be spoiled by fertilizers. 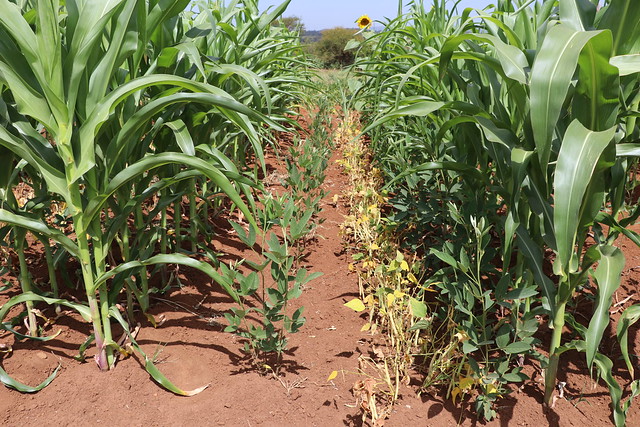 The question on whether the newly introduced technologies are economically beneficial often emerges during inception forums for new farmers. However, this is not a problem for keen farmers like Hussein Bura, a lead farmer in Riroda village, who has already increased the area under technology trial from a quarter acre to one acre.

‘I was impressed by the performance of maize under the Mbili Mbili system. The plant population was higher and cobs bigger than in my normal systems. Response from fertilizer application was also good, which provoked me to purchase some more fertilizer besides what was offered by the project, for applying in an additional acre.’ When asked about the yield potential of Mbili Mbili, Bura had this to add: ‘In a good season, ensuring proper spacing and applying fertilizers in Mbili Mbili technology can yield 18 bags of maize relative to 6 bags produced in a normal system.’

Has the project succeeded?

‘We have certainly had very good success over the years of implementing activities in Babati. First, farmers are no longer hesitant to try out fertilizers as was the case in 2013. Second, today, farmers have much better access to improved inputs as both the Minjingu fertilizer company and Meru-Agro seed company have since opened outlets in Babati,’ says Job Kihara, the lead researcher who also works under the Water, Land and Ecosystems (WLE) research program of the CGIAR.

Improved crop performance and economic benefits demonstrated by application of fertilizers has helped to eliminate the initial fear of utilizing inorganic fertilizers. The new outlets opened in Babati by input suppliers are evidence of a rising demand for fertilizers and improved seeds. Farmers have also improved their general good agronomic practices with good results on yields.

Farmer sensitizations on the importance of applying fertilizers and manure to replenish diminishing fertility has impacted over 8,000 farmers since 2013. This is besides other unaccounted farmers who have been indirectly reached through other platforms such as the National Nane Nane Farmer Exhibitions in Arusha town, MWANGA (a free farmer messaging service developed by the project), farmer to farmer knowledge transfer, radio and TV programs.

Currently, the project is planning to assess the extent farmers have adopted the use of Integrated Soil Fertility Management (ISFM) practices that they have been trained in for the last seven years.

This blog was initially published on the Alliance Bioversity-CIAT website

END_OF_DOCUMENT_TOKEN_TO_BE_REPLACED

The Feed the Future Kenya Accelerated Value Chain Development program seeks to widely apply technologies and innovations for selected value chains in order to competitively and sustainably increase productivity, contributing to inclusive agricultural growth, nutrition and food security in the...

The Kenya Crops and Dairy Market Systems Development Activity (KCDMSD) is a five-year (Oct 2017–Sept 2022) program of the United States Agency for International Development (USAID). It is funded as part of Feed the Future, the US government’s global hunger, and food security initiative that helps...