The renaissance of farming systems research in Africa 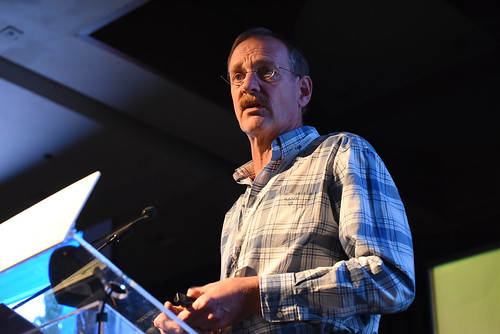 When I first visited the the headquarters of the International Institute of Tropical Agriculture (IITA) headquarters in Ibadan in 1990, I had the privilege of being shown around experiments on alley cropping by a young upcoming scientist –  Nteranya Sanginga. Little did I know that I would visit IITA over 25 years later with him as director general of an institute that has grown from strength to strength under his leadership. In 1990, I also visited the Kano and Ibadan research stations in the context of a conference of the African Association of Biological Nitrogen Fixation (AABNF) – a group that  Sanginga and I continued to support over the intervening years.

I can remember heated discussions in the evening at IITA about recent on-farm research where farmers were clearly not interested in adoption of alley cropping – and yet massive promotion of the technology by researchers was continuing. This was the heyday of farming systems research. A major focus was placed on understanding how farms and farming systems functioned and why farmers farmed as they did. Such research helped to reveal problems of labour constraints that farmers faced when implementing alley cropping that had not been taken into account in the experiments conducted on experimental stations.

Farming systems research, at least in the early years, was dominated by agricultural economists although scientists from many disciplines were soon working in teams (Collinson 2000; Mutsaers 2007). Rather too soon in my view, farming systems research was muscled out of the way by the advent of ‘Farmer First’ and the drive for participatory research (Chambers et al., 1989). I recognize this is an over-simplified caricature of research trends, but with the benefit of hindsight I think that the pendulum swung too far away from the detailed study of farming systems. We certainly learned a lot about methodology for learning from and experimenting with farmers (e.g. Defoer 2002), but in my view we did not reap the full rewards of the insights gleaned through farming systems research.

Parallel to these developments a lot of research on soil biology and fertility was going on (Vanlauwe et al. 2017). Mike Swift left IITA in the early 1990s to lead the Tropical Soil Biology and Fertility (TSBF) program from Nairobi which had a major influence on the soils agenda. The limitations of on-station research were particularly apparent when studying problems related to soil fertility. All of the research I was involved in was conducted on farmers’ fields. During the 1990s, I worked extensively with colleagues in Malawi and Zimbabwe and we had the opportunity to run trials across many regions and on many farms. We quickly learned that most of the technologies we had to ameliorate soil fertility problems simply did not work in the degraded soils farmers gave us to experiment on. When chairing an external review at IITA in 2000, I had the opportunity to visit field experiments with Bernard Vanlauwe in the Northern Guinea savanna and we realized we were facing similar problems.

Much of our work focused on the quality and management of organic resources for managing soil fertility. When it came to testing these technologies in the context of farms and farming systems we encountered similar patterns and results across a wide variety of agroecologies across sub-Saharan Africa. We soon realised that the organic resources (i.e. cattle manure, crop residues and other plant biomass) were in critically short supply. Many of the approaches we proposed to address soil fertility did not work in the fields allocated to us by farmers, often because the soils were too degraded. Approaches to grow biomass in situ for soil amendment through green manures or agroforestry were consistently rejected by smallholders who needed to meet their immediate food and cash needs and did not have the luxury to invest in enhancing soil fertility for the long-term.

Since I joined Wageningen University in 2001, we have been able to use the tools of systems analysis to characterize and understand smallholder farming in Africa (Giller et al. 2006; Giller et al. 2011). We use a combination of field surveys and observations, participatory experiments and modelling to probe the constraints faced by farmers, to evaluate technologies and to explore possible development pathways. The outcomes of such research are several. We aim to identify broad ‘baskets of options’ that can meet the needs of the diverse farming communities—poor and better-resourced farmers, women and men through a ‘tailoring-of-technologies’ approach. We encounter institutional barriers and opportunities, particularly relating to markets and knowledge sharing and work with partners to address these. Our research explores the boundaries of what is possible in terms of addressing poverty and wealth creation through agriculture on small farms. This generates important insights that can help to shape agricultural policy and future interventions.

These approaches have been used extensively in the N2Africa: Putting Nitrogen Fixation to Work for Smallholder Farmers in Africa project, which works to scale promising grain legume technologies through >90 public-private partnerships in eleven countries of sub-Saharan Africa.

I believe that changes in our scientific approach over the past 25 years can provide useful insights when thinking about likely trends for the future. In an editorial piece a few years ago, I defined a farming system as ‘a population of individual farm systems that may have widely differing resource bases, differing resource bases, enterprise patterns, household livelihoods and constraints.’

This definition moves us away from seeing farming systems as single recommendation domains as is implied in earlier writings, because: ‘the farm systems exhibit varying degrees of interdependency and interact in use of common property resources. The diversity of farm enterprises requires that development strategies, interventions and policies need to be tailored to their different needs and opportunities.’

END_OF_DOCUMENT_TOKEN_TO_BE_REPLACED

Between 2010 and 2015, the Sustainable Rangeland Management Project (SRMP) assisted nine villages to carry out VLUP, and successfully piloted the implementation of joint village planning across three of these, leading to the protection through certification of a shared grazing area called OLENGAPA...