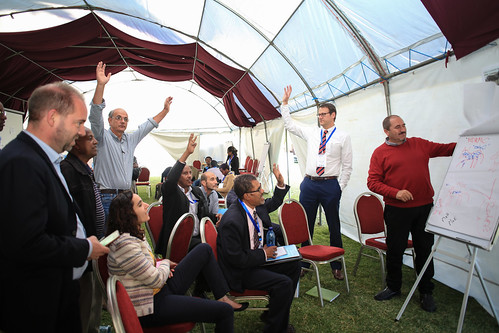 The communication and knowledge management (CKM) team of the International Livestock Research Institute (ILRI) recently supported the process leading to and facilitated a ‘national coordination and experience sharing forum (NCESF) in the area of food security and resilience building programs in Ethiopia’.

This forum, the fourth in a series that started after the La Niña emergency responses in 2010-11, was run the Food and Agriculture Organization of the United Nations as part of the European Commission-funded ‘EC-SHARE’ project. The main objective of the forum was chiefly to identify major gaps and overlaps in the coordination of resilience-building initiatives in Ethiopia. It zoomed in on four distinct issues: a) national coordination mechanisms, b) subnational coordination mechanisms, c) knowledge management and d) gender.

Initial connections, through an unexpected route

After a serendipitous December 2015 meeting over breakfast at the ILRI campus, initial conversations and interests to collaborate to support the forum materialized when ILRI’s CKM team was invited to join the process and attend the first ‘technical coordination committee’ meeting in June 2016. The idea was to draw on ILRI’s experience in knowledge management. One small result was brief ILRI presentation at the forum itself (see below). More substantially, ILRI staff were hired as the facilitation team for the event, and much of the preceding process (Ewen Le Borgne and Tsehay Gashaw).

The mini-project that bound the ILRI team with FAO was much wider than the typical ‘event support’ that we often provide to ILRI projects and partners. It comprised:

At a wider level, it was also very positive as in connected ILRI with important local actors from government and the international community. The whole process also helped build stronger relationships with organizations likely to be involved in ongoing processes to develop more integrated and coordinated CGIAR engagement with Ethiopia’s agricultural (research and development) system.

According to participant feedback, the Forum was successful (the overall value of the meeting was ranked ‘very good’; participants also enjoyed the ILRI venue, scoring 7.3/10 and the facilitation, scoring 8.1/10). The FAO team are now taking forward the longer term process to strengthen the coordination of resilience building initiatives.

Overall, a major lesson is that time invested in such a time-intensive process with partners will also pay off in terms of positive relationship building and political engagement. More specifically:

END_OF_DOCUMENT_TOKEN_TO_BE_REPLACED

Funded by the Bill & Melinda Gates Foundation, the Agriculture to Nutrition (ATONU) project seeks to help the African continent broaden its agricultural focus from ‘eating for hunger’ to ‘eating for health’. It focuses on how agriculture can deliver positive nutrition outcomes for smallholder...

Research questions What is the net GHG balance for agriculture across Vietnam and where are emissions hotspots? What is the potential for mitigation, and where are the mitigation hotspots for rice landscapes? How do mitigation priorities and opportunities differ across farmscapes (e.g. Mekong delta...